Get the Latest Updates, Events & Resources from the Educating All Learners Alliance!
Skip to content

This article was written by Mark Lieberman for EducationWeek and published on March 28, 2022.

The new proposal, unveiled Monday, retains the as-yet-unrealized centerpiece of last year’s pitch: an increase that would more than double funding for the Title I program, which sends money to school districts to serve high-need students.

The majority of the $750 billion America spends annually on K-12 schools comes from state and local sources, with roughly 10 percent coming from the federal government. Advocates for disadvantaged students have long argued that the federal government isn’t providing enough financial support, given the volatility of state politicians’ priorities and the inequitable distribution of local property wealth.

Biden promised while campaigning for the presidency to triple the annual Title I allocation. This week’s proposal falls short of that goal but still seeks an addition of $20 billion for the program, which would give it a total of $37 billion in the coming budget year.

Last year’s proposal included details of a new formula for the additional money that would differ from the existing Title I formula and incentivize states to drop funding formulas that advantage wealthier districts. That language doesn’t appear in the proposal released this week, which instead proposes an increase to the existing Title I program overall.

The new proposal also lands as K-12 schools have stumbled through an academic year marred by virus outbreaks, staff shortages, political firestorms, soaring inflation, and crushing fatigue. Several provisions address those realities, including $350 million to improve school staff recruitment and retention; $1 billion to double the number of school counselors, psychologists, and social workers; and $438 million in new funding for community schools with wraparound services for students.

And the proposal includes $16.3 billion in Individuals with Disabilities in Education Act funding, a hike of more than $3 billion.

But funding for the nation’s crumbling school infrastructure was notably absent from this week’s budget proposal. Last year’s Biden administration budget plan included $50 billion in grants and $50 billion in bonds for school construction and renovation. Those funds fell out by the time the final budget passed, and a similar push in Congress for K-12 facilities aid also came up empty.

During a briefing Monday, U.S. Department of Education officials said they hope Congress will move forward with additional school facilities money despite its absence from the list of agency priorities. 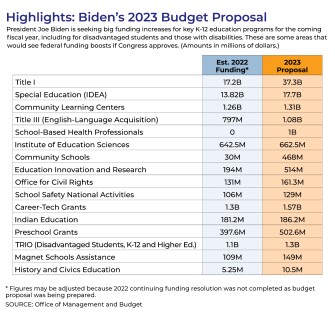 “We know that there’s great need across the country,” said Roberto Rodriguez, the department’s assistant secretary for planning, evaluation, and policy development.

This week’s budget proposal does include $2 million to establish a National Clearinghouse on School Infrastructure and Sustainability, to be housed within a new Education Department office dedicated to supporting school infrastructure projects.

Other key priorities in the proposal include:

In a statement Monday, U.S. Secretary of Education Miguel Cardona framed the proposal as an expression of the urgency of supporting students, particularly those from marginalized groups, beyond the pandemic.

“It’s my hope that Congress answers the president’s call for continued investments that help our schools hire and support more teachers, school counselors, and other personnel who can nurture the social, emotional, and academic development and mental well-being of our children and youth in this critical time and beyond,” he wrote.

With a looming election cycle that appears poised to deliver Republican gains in at least one branch of Congress, Biden may face an uphill battle enacting his $5.8 trillion proposal for the entire federal budget. The process can be protracted—the current fiscal year’s spending plan, signed into law on March 15, took 10 months after Biden’s proposal to reach the president’s desk in its final form.

Education advocacy organizations offered early praise for Biden’s proposal, emphasizing the critical role of funding for securing children’s futures as the country aims to recover from the ongoing pandemic.

“President Biden gets that these much-needed investments will positively impact students as we navigate our way out of this deadly pandemic,” Becky Pringle, the president of the National Education Association, wrote in a statement.

The Education Trust, which advocates equity in education, praised the budget plan but urged other actions as well. “We also call upon the administration to continue to push for what’s needed, including helping marshal existing relief funds to solve problems alongside states and districts, and policies to support students’ postsecondary completion and nutritional needs,” Denise Forte, the interim CEO, said in a statement.